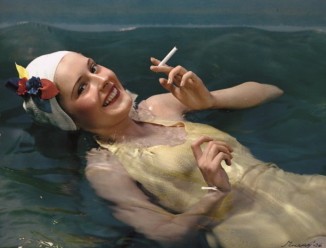 On March 12th The Disagreement presented its 8th Installment: Shithoused.*

It’s almost cliche to explore the connection between intoxication and creation, but handled deftly, characters under the influence can provide for some moments of real pathos and  humor. Last Wednesday night, a group of five readers took us through many kinds of intoxication, moving past simple drunkenness and delving into the more nuanced things that hold us hostage. Not least of all was a shared intoxication with language, and these writers offered words crafted into something you could get lost in as well.

Hannah Sloane began the night by tacking what can be the most intoxicating drug of all – love. Relationships and what can hide in plain sight. Michael Keenan took us through the pleasure and terror of shared drug experiences, imagined car rides and back and forth conversation-via-poem. Cat Richardson explored the dual sides of an infestation, both wanting to be part of and separate from it. She asked us to stare down the fear of becoming a database incapable of love, to consider chemical anxiety and expectations unmet. Lilly O’Donnell reached out to the far depths of memory: what it feels like to be a child and if it’s ever possible to be an adult, viscerally evoking the summer in the city to a cold and winter-broken audience. Finally,  Lizzie Harris, having arrived fresh off Amtrak, was happy to share what she’d gleaned in three hours of overheard conversation (and isn’t that it’s own kind of drug?) in between her poems. Lizzie’s first book “Stop Wanting” has just been published by Cleveland State University, but on the audience she dropped a new set of work (and literally dropped the mic).

See you May 14th for Wet is Better Than Greasy (submissions open!). 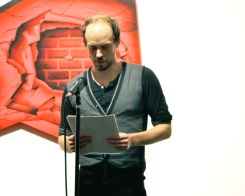 “Too much of anything is bad, but too much Champagne is just right.” Or so said F. Scott Fitzgerald. Writers are famous for both getting drunk and being drunks, but next Wednesday when the Disagreement presents Shithoused, our readers are going to explore some less dipsomaniacal forms of intoxication — memory, relationships, and home invasions, metaphorical and otherwise. And they’ll be taking a look at the buzz we can get from these and other varieties of human experience. A drink is an easy thing to give yourself over to, it’s the rest of it that takes a real connoisseur.

It’s been a hard winter. Come and get hooked on something new.

At Culturefix. We start at 7.

Hannah Sloane’s fiction and essays have appeared in: Monkeybicycle, Freerange Nonfiction, Nerve, The Good Men Project, Vol 1. Brooklyn, and elsewhere. She lives in New York and is currently working on her first novel.

Lilly O’Donnell grew up just a few blocks from here, and has been writing about this neighborhood for about as long as she can remember. Now she’s a bartender, and is working on her first book, a heavily-reported memoir about her artist father’s life and work. Her freelance writing has appeared in New York magazine, VICE, BUST, and The New Inquiry.

Michael Keenan’s first book of poems, “Translations On Waking In An Italian Cemetery,” will be released by A-Minor Press in the spring of 2014. His writing has appeared in the PEN Poetry Series, Fence, Alice Blue Review, RealPoetik, NYQ Reviews, Umbrella Factory Magazine, inter|rupture, Shampoo, Paul Revere’s Horse, and Arsenic Lobster, among others. Michael no longer drives a waffle truck in Northern Florida, but he wishes that he did.

Cat Richardson’s work has appeared in appeared in Tin House, Four Way Review, and Sonora Review, among others. She’s managing editor of Bodega Magazine  and a poetry editor at Phantom Limb Press. She likes you just fine.